Welcome to the September 2019 edition of SSL.com’s Security Roundup, an end-of-month digest where we highlight important developments in the field of SSL/TLS, digital certificates, and digital security in general.

CA/B Forum Ballot SC22, a proposal to reduce the maximum validity period of SSL/TLS certificates from 825 days to one year in the forum’s Baseline Requirements, failed to pass after voting ended on September 9. The measure was unanimously supported by the browsers, but only 35% of CAs voted YES, falling far short of the 66% required for the ballot to pass.

Detractors (including the majority of CAs), while sometimes agreeing in principle that shorter certificate lifespans are more secure and accepting that this is the direction that the industry is headed, maintained that

SSL.com voted YES on the ballot, stating that:

Given the ongoing debate and persuasive arguments presented, we fully understand why other CAs choose to vote NO or abstain. However, as part of our ongoing efforts to be responsive and agile as a CA, this is the direction we are heading regardless of the outcome of the ballot.

The SSL Store’s Patrick Nohe has a longer take on SC22 and the differing stances presented.

DNS over HTTPS (DoH) in Firefox and Chrome

Mozilla and Google both made announcements in September about implementing DNS over HTTPS (DoH) in Firefox and Chrome:

UK readers should note that “internet villain” Firefox will not enable DoH by default for Britons anytime soon; however, it is very simple to enable, so don’t let that stop you from encrypting your DNS queries to your heart’s content.

And Speaking of Cloudflare…

Cloudflare announced on September 25 that it will be rolling out its WARP and WARP Plus (or WARP+ depending on where you read it) services to the general public via its1.1.1.1 mobile app, extending the app’s current function of providing encrypted DNS to mobile users. 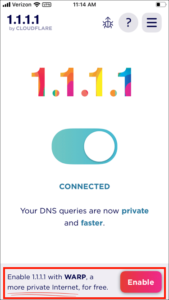 As described in Cloudflare’s earlier (and non-fooling) April 1 announcement, WARP is a VPN, built around the Wireguard protocol, that encrypts network traffic between mobile devices and the edge of Cloudflare’s network. The basic WARP service is provided free of charge, “without bandwidth caps or limitations.” WARP Plus is a premium service, priced at $4.99 per month, that offers faster performance via Cloudflare’s Argo network.

Cloudflare is currently offering 10GB of free WARP Plus to the approximately 2 million people on the WARP waitlist, and 1GB of service for referring a friend.

Is Your Server Leaking Keystrokes?

The Register reports that security researchers at security research group VUSec, of Vrije Universiteit Amsterdam, have discovered a side-channel attack, dubbed “NetCAT,” that allows a well-connected eavesdropper to observe the timing between packets of data sent to servers using Intel’s Data Direct I/O (DDIO) technology (i.e. all server-grade Xeon processors issued since 2012). VUSec researchers demonstrated that these data can be used to reconstruct a target’s keystrokes by comparing them to a model of their typing behavior.

Thankfully, the NetCAT exploit is non-trivial to implement and requires that the attacker be directly connected to the server. Intel itself characterizes the vulnerability as not-particularly-severe, stating that

Employing previously published best practices for side channel resistance in software applications and cryptographic implementations, including using constant-time style code, can mitigate the exploits described in this research.

If you’d like to go straight to the source, check out VUSec’s white paper on the attack.

Thank you for choosing SSL.com! If you have any questions, please contact us by email at Support@SSL.com, call 1-877-SSL-SECURE, or just click the chat link at the bottom right of this page.